Hollywood loves Atlanta and has for a long time but lately, it’s happening more and more. You’ve probably noticed all the film and tv productions going on around town over the past 6-12 months. The Georgia film industry is booming and there are plenty of Atlanta film set locations popping up intown and across the metro area.

Now that Pinewood Studios are located just outside of Atlanta, down in Fayetteville, there has been a huge increase in major film and television productions, including several recent Hollywood blockbusters. Atlanta is rapidly becoming Hollywood’s East Coast hub and there are many more productions planned to be shot here. Along with those films that have recently come and gone, there are more headed for theatrical release, already on the way.

One recent star-studded production, Keeping Up with the Joneses was filmed last year at one of our beautiful new home communities in West Atlanta. The main characters played by Zach Galifianakis and Isla Fisher, find themselves feeling naturally competitive and very curious when their new “perfect” neighbors, the Joneses (played by Jon Hamm and Gal Gadot) move into the neighborhood. If you haven’t seen the trailer yet we invite you to watch it now. The filmmakers loved the attractive craftsman style homes and community design we constructed as they selected it for the main setting of this laugh out loud domestic relationship comedy. Whether you like the film or not, we believe you’ll appreciate the visible appeal of the neighborhood onscreen. 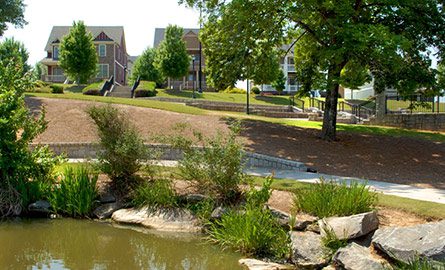 More Quality on the Westside

The charming homes you’ll see in the movie are no longer available, but we have other award-winning new homes nearby. Several of these West Midtown community locations have ready to move opportunities available if you’re currently in the homebuying market. We know you will fall in love with the quality, value, and attention to detail available in all Brock Built homes. Stop by one of our InTown neighborhoods on the Westside today!