Do You Say Fall or Autumn? We Like Them Both

When the leaves start to change color and the weather begins to cool off do you refer to this season as fall or autumn? We like them both but wanted to learn more. Turns out that both terms for this colorful season have quite a rich history behind them. Now that the fall/autumn season is definitely visible all around Atlanta, we wanted to share some findings and thoughts on the origins of these seasonal names.

Another Name for Fall

Most people are familiar with the words fall and autumn being synonymous for the season that occurs between the end of summer and beginning of winter. However,  did you know that it wasn’t until the late 14th century that the Latin word autumnus first appears in written English? It quickly begins to gain ground on the original name in use for this transitional period, harvest. This older term was apparently considered somewhat confusing for the people who wanted to refer to the harvest months as something different and more distinctive. Soon after the seasonal name autumn becomes the more popular of the two words in use until the 1600s. 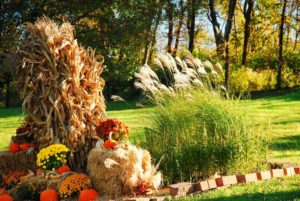 By the 18th century, the name autumn has replaced harvest, but there is also another popular and more poetic term growing in use. The very descriptive phrase “fall of the leaf or leaves” is condensed and simply becomes fall. As more and more English settlers arrived in the New World of early America, separate dialects of the English language began to form. Certain words like fall and autumn became caught up in the establishment and identification of our new nation’s lexicon. Despite both words having their origins in England, by the 1800s, fall becomes the more popular American name used for the season, while to this day, the British continue to call it autumn.

As for us, we like both of them and use them interchangeably depending on the occasion. We certainly understand how the word fall became so popular in America once you experience the beauty and color of the trees with their falling leaves. No matter which seasonal name you prefer, if you’re looking for a new home in the Atlanta area, we would love to show you what we have available. Contact our community agents today for more details.