As Spokesman of the New South, Henry Grady said that the 4th mayor of Atlanta, Jonathon Norcross, was a tenacious and civil soul and considered him the Father of Atlanta. Norcross opened the 1st official manufacturing facility in Marthasville/Atlanta (a mill & lumber supply) and belonged to the group responsible for renaming the town. The last of the antebellum mayors, Mr. Norcross had a vision of growth and order for Atlanta as a city, not just a railroad terminus. To succeed in converting Atlanta from a small town to a city, Norcross knew he had to establish more law and order. Indeed, there were certain zones that were running wild with drinking, fighting, and general debauchery. So just after his election he began to charge all those found participating in drunken street fights and other illegal activities as criminals, locking them all up until the new city jail was full.

Active members of the opposing political group, the Free and Rowdy Party, were not thrilled with the new law & order from Mayor Norcross. In a show of defiance, some members of their group went to Decatur and stole a commemorative cannon leftover from the war of 1812. They wheeled it back into Atlanta and fired it directly at Norcross’s general storefront, leaving behind a note with threats if the new mayor didn’t stand down. Many of these rowdy fellows lived in an area of log cabins and huts along what would eventually become Peters Street. The area was called Snake Nation due to being popular with snake-oil salesmen and transient party-goers. Soon after the cannon incident, the more temperate citizens of Atlanta rode into Snake Nation and burned it to the ground in an uproar over the ongoing threats and violence from the Free and Rowdy Party.

Snake Nation would remain in ruins for years. Eventually, an enterprising local businessman named M.T. “Daniel” Castleberry came to prominence in this area of Atlanta. He had several business interests including a family grocery at the intersection of Peters and Fair Streets. He also owned most of the land in the same area. As the renamed Castleberry Hill area grew from the ashes of the Snake Nation it became an epicenter of mills, shops, and warehousing until the end of the 1980s. While the 1990s were not kind to the businesses in the area, the charming appeal of Castleberry Hill has been enjoying a revitalization for almost 20 years now. With an enormous and thriving art scene, restaurants, and curio shops, Castleberry Hill has become one of Atlanta’s best neighborhoods to explore your creative side. The preservation of the mills and shops, combined with the walkable community, makes for a perfect intown community experience. A place where anyone can find their muse. 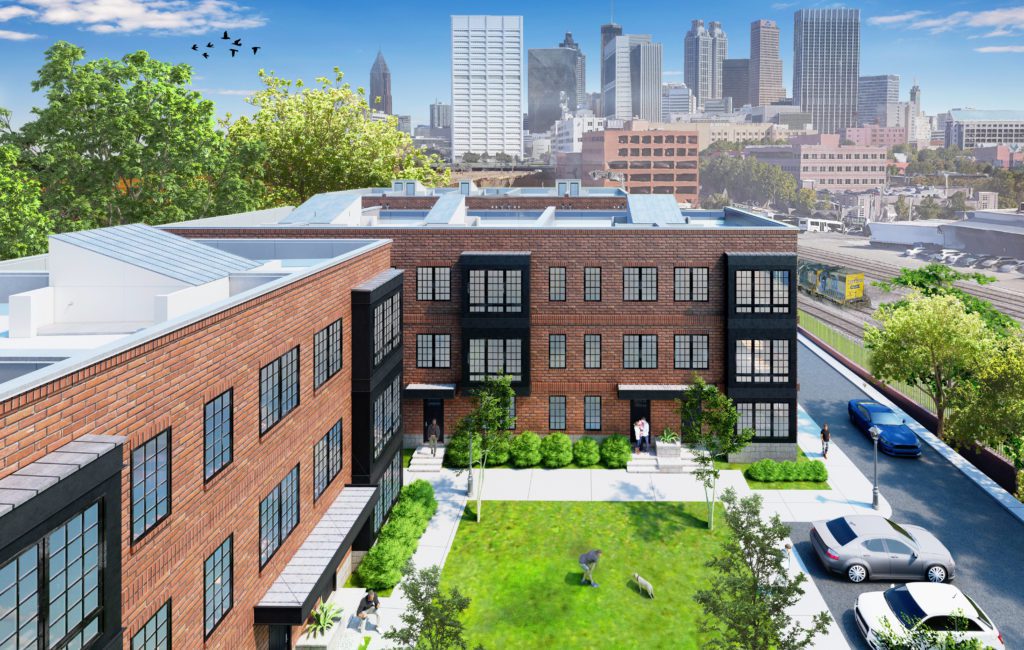 Embracing the nature and culture of Castleberry Hill, Brock Built is proud to offer Castleberry Station, their new premier townhome development. Castleberry Station retains the industrial look and feel fitting perfectly in the area. Each all brick 3 story townhome available, ranging in size from 2100-2300 square feet,  comes with an amazing views of the Atlanta skyline. We believe Mayor Norcross would proudly approve of today’s modern Castleberry Hill neighborhood. And, that he would be equally impressed with Castleberry Station’s dedication to style in the heart of Atlanta’s best industrial art district. You can read the August 8, 1985 National Register Listing for this historic neighborhood in PDF format here.