Red Dog‘s Friend, Will Brock, Embarks on a College Adventure 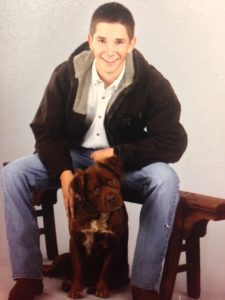 A monumental moment for the Brock family is fast approaching, as Walton High School Senior Will Brock prepares for his upcoming graduation day and Red Dog gets ready to say goodbye to one of his favorite companions. Will is the son of Brock Built President Steve Brock and his wife Evanne, and has spent his summers working for the family business since he was only 11-years-old. He currently works as a builder assistant on construction jobsites, but also assists with strategically placing directional signs that help increase traffic to our new home communities throughout metro Atlanta. Will begins a new adventure this fall when he follows in the footsteps of Jeff Brock and makes the move to the beautiful campus of Auburn University, where he will major in Building Science. While he is excited to begin his college experience, one thing is for sure—he will greatly miss his furry, four-legged friend. Red and Will have built a close friendship and created many memories together since the beloved rescue-dog became a part of the Brock Built family. When they aren’t both hard at work, (Will on the jobsite, and Red lounging on the couch or under a conference table at the office) they love spending time enjoying the outdoors, going fishing, riding four-wheelers and hiking. This football season, the Brock house will be divided as Steve cheers on the Georgia Bulldogs and Red Dog supports his buddy Will by loudly barking “War Eagle” when the Tigers score a touchdown. The Brock Built team is proud to congratulate Will on his outstanding achievement and we wish him all the best as he embarks on this new adventure!