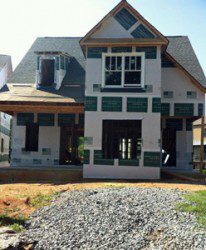 Who says you can’t go home? When Atlanta home builder Brock Built purchased four home sites in Norcross at Lum Howell, it was a deal close to the heart of Brock Built’s design and marketing manager. After all, Evanne Brock’s family was born and raised in Norcross. “I’m very excited about building in Norcross,” Evanne said about the new community. “It’s a charming little city.” Evanne’s family was influential in the growth of Norcross. Her cousin is a former mayor; an uncle owned a grocery store and another cousin ran the local post office. Norcross has grown since that time, but that close-knit feeling remains. Businesses thrive here, thanks to the city’s focus on improving the economy. A 300,000 sq. ft. movie production lot being built in Norcross could be the largest in the country. Families with young children love the award-winning parks, year-round recreation classes and summer day camps. Weekend trips to Jones Bridge Park are great for the whole family to get some fresh air. The large playground and four soccer fields are perfect for active kids. The fishermen in the family will appreciate the access to the Chattahoochee River. Adventurous eaters will find something unique to eat at a host of restaurants. Sip a cup of English tea at Taste of Britain, chow down on authentic Mexican food at Zapata, or enjoy a slice of New York style pizza at Paizanos. All of it is just minutes from the Lum Howell community. Call 678-471-9835 today for information about the Lum Howell community.