“I am one Lucky Dog” says Red Dog Brock 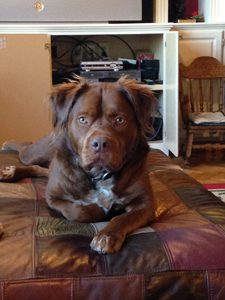 March is the month of the Luck of the Irish and Red Dog Brock, looking kind of Irish, is one lucky dog. He was rescued by the Brock Built Homes family a few years ago when he wandered up to our old office on Fairmont Avenue. Employees started feeding him when he would visit, and soon he became a regular around the building. After a while we were able to coax him into the car, and he and our president, Steve Brock, became quick friends. Today Red Dog is an integral part of the Brock Built team. He can sometimes be found at the office where he doesn’t have his own desk, but he has claimed the space under the conference table for his own. Red Dog spends his evenings in the Brock family home curled up on the couch between Steve and Evanne Brock where he can be the center of attention. He loves a good walk at night followed by a good night’s rest in his own dog bed. At the family’s farm, Red Dog can be seen running across the property and swimming in the pond. He loves the outdoors. He also loves to visit new homes under construction. Steve will take him to walk the streets of new homes in Atlanta or ride with him as he checks out real estate in Cobb County. Red Dog is a larger dog and he needs space to run and play, so he loves the open floor plans of the spacious homes we build in East Cobb, Woodstock and throughout the Atlanta area. Learn more about all the great Brock Built Homes and check back each month to find Red Dog’s favorite homes and communities. For information about all of the great Brock Built homes call 404-472-5707.